It was just PK and me walking today, i left cookie at home because of anticipated pebbles and long grass, both of which she would hate and both of which we encountered so leaving her behind was a kind option. The trek today is going to be all coastal, following the route that the barges would have taken through Chichester Harbour. The 1st half of the day’s walk was all the way around Chidham and Cobnor point, a peninsula of land that you can only walk around at low tide as the path at Cobnor Point on the southernmost tip floods at high tide and is totally impassable, that is so annoying if you are caught out and what happened to Susan and i when we did the Pier to Pier trek last year.

The day started off a little overcast however the wind was pretty relentless and with such a force that just kept blowing, because of this the clouds dispersed quite quickly leaving a lovely clear sky for the afternoon albeit that the wind was with us all day, usually it’s me with that problem, so i didn’t take the blame for once………lol.

The East side of the peninsula started off by going through farmers fields, passing through Chidham and then around the shoreline to Cobnor Activity Centre. The tide was at it’s lowest now and the harbour was mainly mud, silt and weed with a channel down the middle where boats can pass up and down. From the activity centre was a purpose made accessible path to Cobnor point, from this part of the path you have great views up the Chichester Channel where the barges would have come down and around Cobnor Point. At the end of this path were some steps that led you down to the pebbly beach and the part that can only be passed at low tide. This part of the walk was on pebbles in front of a high grassy covered bank with oak trees stretching out over the shore, or are they reaching back with their roots so that they don’t drink too much salty water, nonetheless they were pretty amazing that they have adapted themselves to such a harsh environment with the salty water and air along with the exposure to the wind and sun. There was quite a bit of erosion on the bank and a new path further inland had been created for a safer route, but as it was low tide we could follow the shore round safely and keep to the route of the barges. The bank has had attempted repairs on it using concrete but the forces of nature have taken it’s toll and had broken a lot of the concrete up. 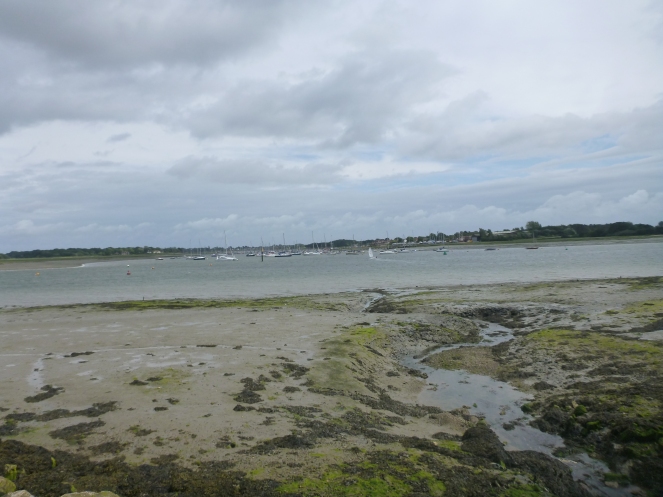 Walking up the western edge of the peninsula was exceptionally windy as the prevailing south west wind would just not let up making it hard work to walk against. The western edge would be following the Thorney Channel which the barges would have taken and across the water and mud you could just make out the inlet called the ‘Great Deep’ (sounds like a monster should live there) where the barges would have crossed Thorney Island. At the top of the channel we started to head west as we had completed the peninsula and we were both hoping that an ice cream van would be parked up at Prinstead, selling lovely creamy 99’s with a plain chocolate flake, but unfortunately no such luck and at this point PK wished he had stocked up on chocolate earlier. We left the harbours and crossed Thorney Island at the top end as this was the nearest point to the ‘Great Deep’ and this path passed through fields and by a water treatment plant, we seemed to have passed a few of these and this one did not smell as bad as the others as they seemed to be spraying a scented mist into the air, however just as we approached the plant we were totally swamped by midges, i had never known so many and you felt like you couldn’t breath as you walked through the clouds of the horrible critters, i was frantically waving the map around thinking it would help clear a way through, eukk! 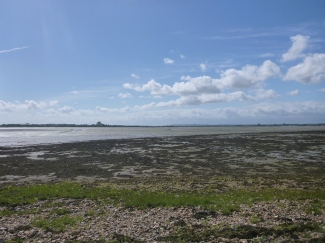 On the other side of Thorney Island was Emsworth Marina which again had some lovely boats moored in and many out of the water being renovated, here there were futuristic type houses on stilts, probably holiday homes. As we exited the marina we walked by Slipper Mill which would have been a port of call for some of the barges taking goods to London and then past slipper pond into Emsworth. At this point we were now getting hungry so we thought about stopping here for food, pie was on our minds again. But this was not an easy task as the 1st pub we passed was closed, the 2nd wasn’t serving food in the evening and the 3rd didn’t start taking orders until 6:30pm which was an hour away (and they had steak pie on the menu). We had to accept that food was not happening in Emsworth, so we decided to have a beer along with some nuts and crisps in the Bluebird before carrying on.

From here it wasn’t far to Langstone Harbour, so we headed out of Emsworth on the causeway around Mill Pond and then along the shoreline, looking back you could make out where the canal route would have come off of Thorney Island and back into the harbour channels. We again headed inland a short way through fields and passed Warblington church, cemetery  and castle before heading back to the shore, the tide was still a long way out and we could pass along the coast here easily as this also was a tidal section. On arriving at Langstone we passed the mill that used to refine corn and has been standing there since 1730. Behind the mill is a small pond with ducks, coots, moorhens and loads of white egrets nestled in the trees. We decided to eat at the Ship Inn which overlooked the harbour, but all the window seats were reserved so couldn’t look out. We were in the pub for about an hour enjoying our pint of San Miguel along with a Smoked Mackerel and Potato & Caper salad and  PK’s burger and chips, yum!

When we went into the pub the tide was still a long way out and it was absolutely incredible that on leaving the pub the tide was all of a sudden high, it had come in so quickly and covered the mud, we worked out that it would have risen by 500mm in 15 minutes and at that speed it could so easily catch you out at Cobnor if your timings were not right. From here we were to leave our trail for the short walk to the station following the Shipwright way.