We started after lunch today, Matt and Gemma had stayed over the night before, so it was great to spend the morning with them and debating the weather on our phones, it was amazing that all three had different forecasts, me the optimist stuck with what my phone was saying which wasn’t far wrong, rain in the morning and clearing up in the afternoon; which it did…..

PK picked Cookie and i up early afternoon and we parked at the station in  Ford (don’t mention to PK about reversing into the wall of the station, even though he had the reversing beepers on the car……..ooops!). We headed down the road to where we left off from last time, and on this short bit of road you could see a small section of the old canal going under the road and past a couple of houses that were built in 1877, i would guess that in the day they probably had a role to play in the operation of the canal. On leaving the main Ford Road it was straight into the farmers fields and the path took us right across the middle and through the crops, apart from on the map there was no evidence of the canal here at all, it suddenly stopped at the back of the cottages and became the field of crops. 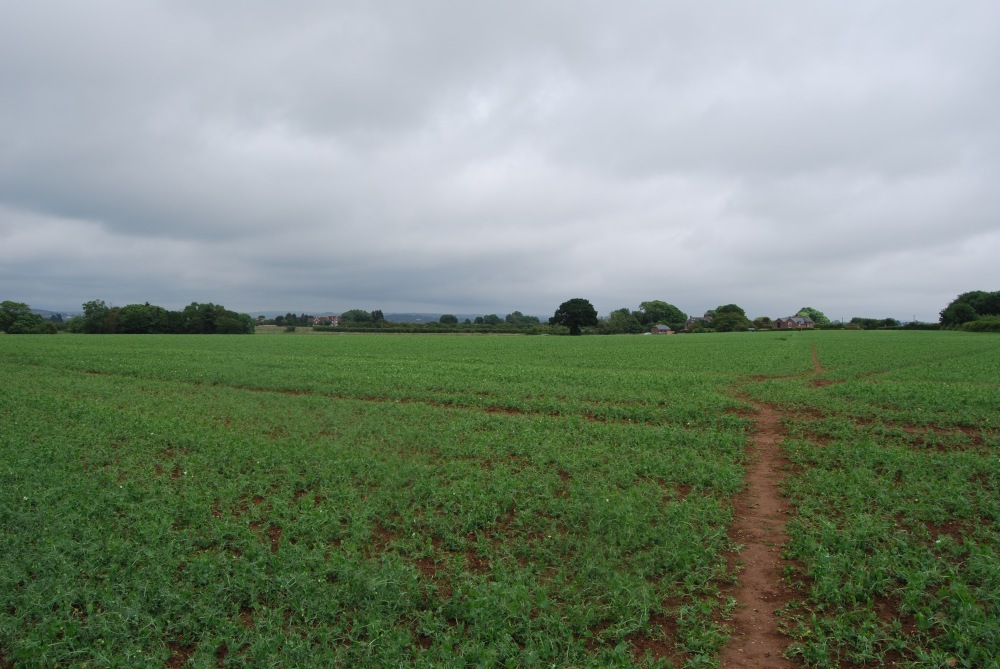 From Ford to Yapton it was mainly going through and around crop fields until we reached the outskirts of the village when the canal started to become apparent again, you could make out the distinctive dip in the ground and generally a line of trees too. A lot of new houses have sprung up here and you could tell that this canal has made it’s mark in history as the roads were named after it, like Navigation Way and Canal Road this naming of roads was also seen later in the day as we approached Chichester too. Incredibly we found some more evidence of the canal amongst this urban area as an old bridge is semi hidden behind some bushes and trees, it’s absolutely amazing that it has stood the test of time and remained intact, the bridge sadly served no purpose any more and was just overgrown. We stopped at the Co-op in Yapton so that PK could pick up a Mars bar to boost his energy and then we carried on and out of the village, on leaving there is a fine example of a bridge that i would imagine has got a preservation order on it, as all around it there are houses with some actually built on the path of the canal. 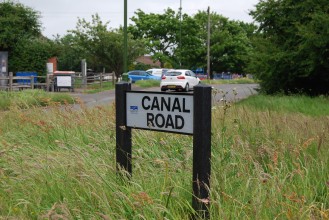 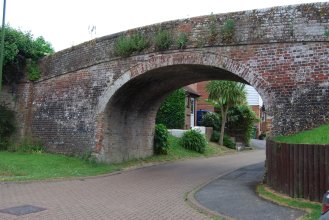 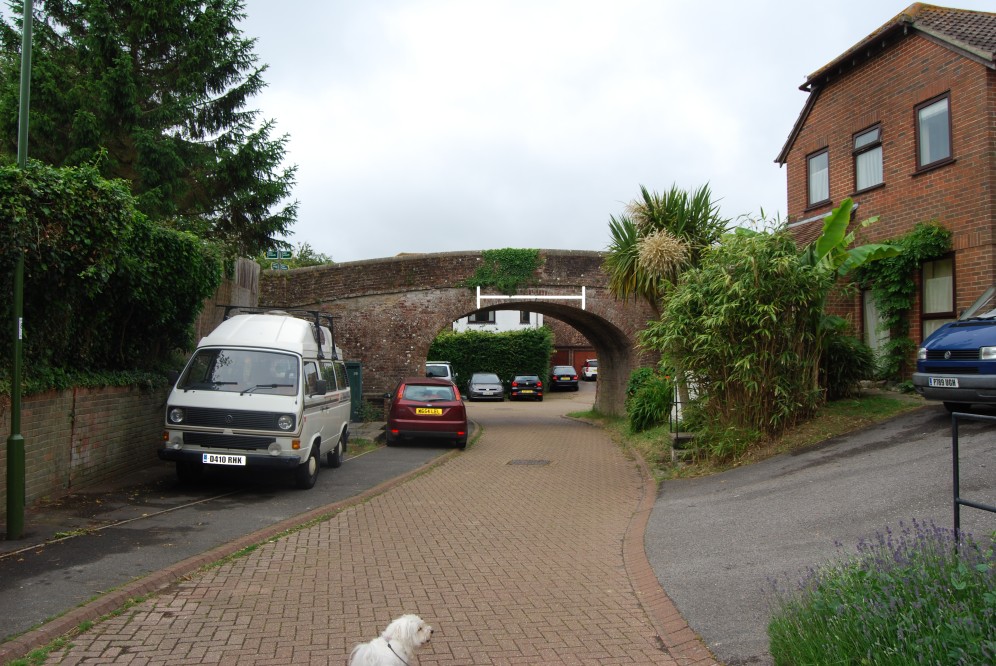 The disused canal from Yapton onwards is now quite evident as to the route it took and the path runs along with it too, on this section that passes Barnham there are many remnants of the  ‘Hollingsworth Swing’ Bridges that used to operate on this canal allowing farmers access to their fields. 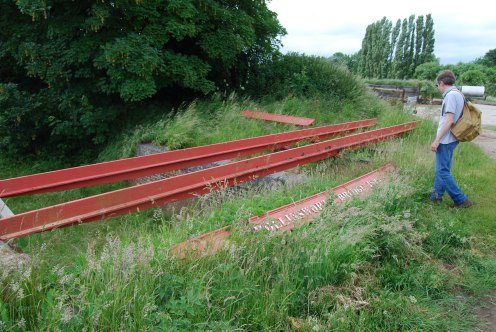 A couple of miles to the South of this section of canal is home and we could pick out some distinguishing points, like the two tall trees by PKs house, Fitzleet flats and Butlins. The grass again was quite long on this section and every now and then i would see a cloud of pollen get kicked by PK out of the tufts of grass, which did not do me any good at all, from amongst the long grass was a small grass snake just basking in the sun on the path, he/she was lucky that we didn’t tread on them. A little further on and after crossing the railway line we were greeted with the most foul stench that got stronger the further we walked, we eventually found out that it was the main sewage plant for Bognor, it was disgusting. We crossed the A29, the main road that leads to London and also in the main follows an old roman road called Stane Street, hence it is pretty straight. 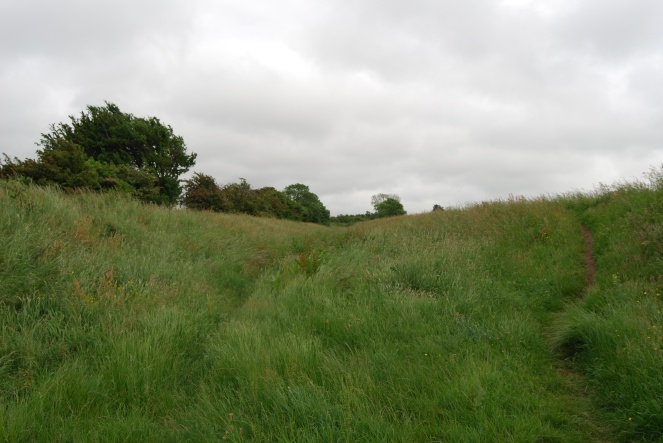 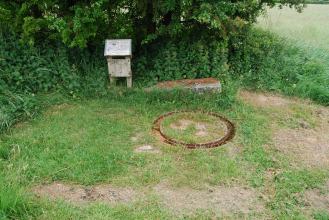 On the other side of the road the grass is surprising well kept and nicely mown and every so often there was a test pipe with a gas tap on the top, these are for the gas that is drawn off the local landfill site, as you can see from the blog that this little section of the disused canal is not that pleasant, however although disused and overgrown the canal is still quite evident on our left. When the neatly mown track finished it went to quite the opposite and we were battling against some really overgrown path, of which later we found out that there was an easier route around. The fields all of a sudden changed and were full of poly tunnels that had strawberries and raspberries growing in them, you could smell the sweet aroma and also see the the big juicy fruit growing too, so tempting, it makes you also wonder how many get eaten by the staff……We walked past these tunnels for quite a way through Colworth, across the A259 and finally on to Merstham where we would leave the overgrown paths and join the road for the next few kilometres, this was much to cookies delight as she was so fed up with the long grass. At this point the only evidence we could find apart from on the map was a dilapidated bridge, again very overgrown and in a lot of ruin.

The route of the old canal would have gone straight across the fields, which there is no footpath so we need to leave the paths here and follow the road for a short way, a little bit risky as it was single track, however on reaching Mundham there was a proper pavement which made it much safer. At Mundham we decided that a 15 minute rest is in order so we stopped off at the Walnut Tree for a quick lime and soda, makes a change from the water that I’m carrying. From here to Hunston meant following the road as this main route to Chichester follows a small part of the canal which is very evident next to the road, parts of it even contain water. 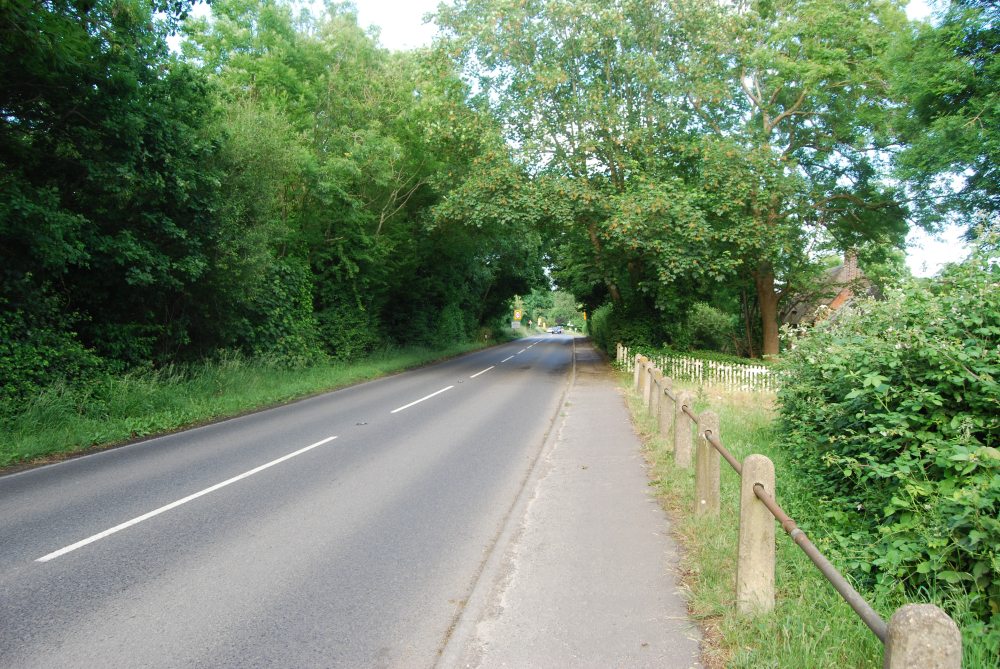 At Hunston the canal divides, you have the branch line which goes into Chichester and the main canal which carries on to Portsmouth, we are to take the branch line today that will take us alongside a working section that regularly run trips, especially Easter Bunny and Santa trips during the holidays. This section of the canal is also very tranquil and you often see anglers with their rods out, today though it was more joggers and walkers. After passing under the A27 we are coming in towards the city and the canal basin, you also have here the only working ‘Hollingsworth swing bridge’ that is predominantly in the open position, i have seen them close it once in the past.

The basin in chichester is home to the two pleasure barges the Kingston and the Richmond and also many small rowing boats that you can hire, the canal society also keeps it’s working vessels here too, which one year i managed to invest some explorer scouts on. 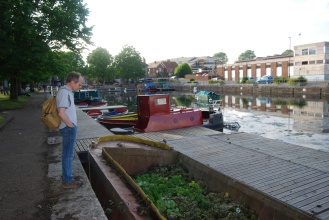 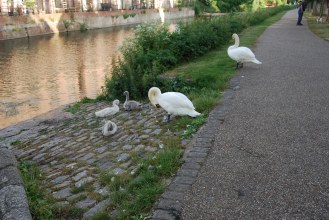 Since leaving the Walnut Tree we had both decided that we really fancied eating at a local carvery as being a Sunday we really fancied a roast. So after catching another delayed train, picking up the car, dropping off cookie and arriving at the pub we could not believe that the kitchen was closed……unbelievable! We were running out of choices and ended up in The Fox in Felpham where we had something completely different to what we had psyched ourselves up to……..