The sun is shining, it’s bank holiday weekend and a great day to continue the walk along the lost route. Susan, PK, Cookie and Kiah have all joined me on todays trek from Cranleigh. The hike started with a brief walk along the road before heading back across the fields to the canal of which we followed a short way before it then cut through private land meaning that we had to follow the footpaths close by and leaving the edge of this disused waterway. We decided to play the ‘Penny Game’ which is something that we used to play in the car with the children (and occasionally still do), The game is very simple in that you have to name an object or animal or anything really and the first person to see the said object wins a penny. So i suggested a Kingfisher, PK a Rabbit and Susan a dragonfly and we then had to keep our eyes peeled for the rest of the day. 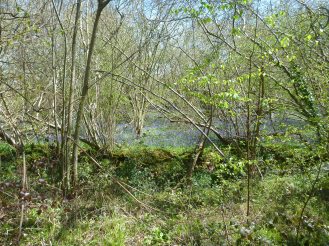 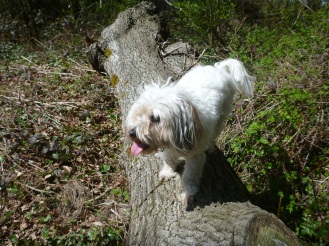 The first half of the walk did not continuously follow the canal as it went through a lot of private land and this meant that quite a bit of the walking was on minor roads. However the second half of the walk was to be completely different as we would rejoin the exact route of the canal. After walking across open farmland at the start of the day, we were now going into Sedghurst Wood where the canal winds it way through. As we walked in to the woods we were met with a beautiful sweet smell and a sea of blue, the blue bells were out in full bloom and we had never seen such a lovely display as here, the good thing too is that it was not awash with people wanting to catch a glimpse of the flowers. 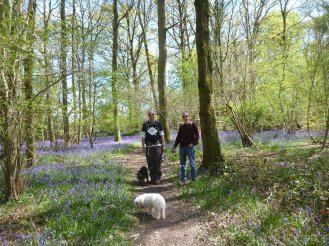 A little way in to Sedghurst Wood and following the edge of Fir Tree Copse nature reserve we rejoined the canal, which some parts were totally dry. This section was so quiet, when you stopped you could hear just the birds calling in the trees, and only occasionally did we pass someone. The woods surrounded the canal and the sun filtered through the trees which added to it’s beauty, however a lot of trees were also growing out of the canal itself. I would definitely say that this has to be one of my favourite sections of the canal so far.

The section from Cranleigh to Loxwood would once have had thirteen locks, taking it down a gradual gradient when heading south, however as most of the canal is now disused these locks although marked on the map have disappeared since the closure of the canal in 1871. The first lock that we came across was Gannets Lock that was under reconstruction by the Wey & Arun volunteers, there were about half a dozen men milling about and relaying bricks to form the side walls of the lock. There was no water at this point and talking to one of the volunteers he suggested that although this lock should be finished in September 2017, it won’t be navigable for a while yet as they need to get some permissions to restore the canal going through some private land. The canal has been under restoration since 1970 and this section leading up to Loxwood has had many of the locks reconstructed and made navigable since 2010.

The last few kilometres of the walk took us alongside the restored navigable part of the canal and we started to see many more walkers out for a sunday afternoon stroll that had parked up and walked from the visitor centre. We also saw one of the three canal boats that they have full of people enjoying a coffee whilst taking a trip up the canal, seemed quite civilised to me. We finished our walk today at the visitor centre and Onslow Arms in Loxwood, at this point we were now getting peckish so we decided to sit outside and have some food, which when served up was was really good portions and certainly welcome after the days walk. Over our meal it did start to get a little nippy in the air, so soon after finishing the meal and reflecting on the day we decided to look at the visitor centre at which point we watched the canal boats come back in from their trips and pick up the next lot of visitors.

Loxwood is approximately half way through my challenge as i have covered 106 kms from the Bank of England to here and i estimate about the same again to get to Portsmouth. So far over this distance we have seen many things such as Alpaca’s and Parakeets, but today not one of us saw a Kingfisher, Rabbit or Dragonfly…………