Today is the start of the 2016 challenge of following London’s lost route to the sea, a route taken during the Napoleonic war that would be a safe transit for the gold bullion from Portsmouth to the Bank of England and also the wages for the sailors coming back the other way. This system of canals were used only for a short period as the end of the war meant that trade could be done by the sea again and also the rise of the railways saw a much more efficient means of transport. This unfortunately means that the route is no longer navigable as much of the canal is now disused and also on private land, however there is a recognised route from Weybridge to Amberley following the canal as near as possible, the rest of the route can be quite distinguishable of which i will navigate as near to the canal as possible too.

After parking up at Three Bridges Susan, Cookie and Myself caught a train to London Bridge followed by the London underground to Bank, on exiting the underground we came up into Threadneedle Street right outside the Bank of England and the Royal Exchange, this is an area i had not been before. The Royal Exchange was built in the 16th Century to act as a centre of commerce to the city of London, it now houses offices, luxury shops and restaurants. Just across the road from here is the Bank of England, where the gold bullion would have arrived. The Bank of England which is the central bank to England has been sited here since 1734 and is the second oldest central bank in the world. 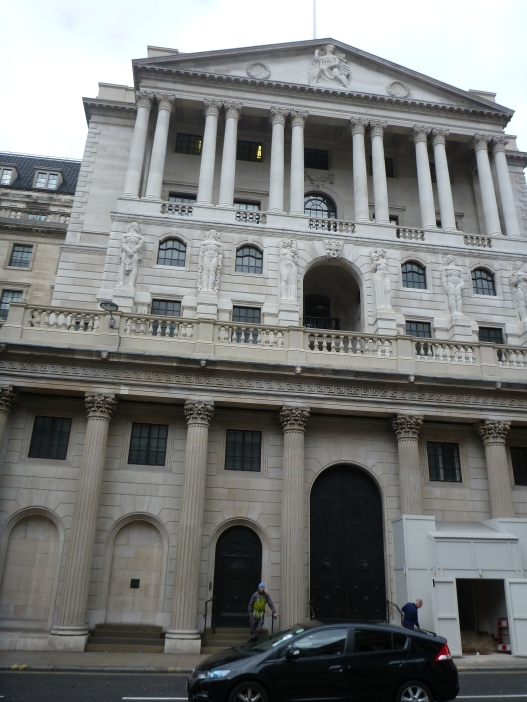 From here we walked down towards London Bridge, which was to take us past ‘The Monument’ a column designed by Sir Christopher Wren to commemorate the great fire of London and stands 221m away from where the fire started in the bakers in Pudding Lane, there is a climb of 311 steps to the top, so decided to go to Pudding Lane rather than climb the steps up the tower. I was really disapointed in Pudding Lane, perhaps i just expected it to be olde worlde but it was very modern with offices and a small plague marking the spot where the bakers shop was, if you didn’t know it you could have walked straight past.

A short walk from here and we were at London Bridge where we would join the Thames that would be with us for the next three treks. The view of Tower Bridge was quite spectacular. Once on the other side of the Thames the path took us through Borough Market, which is a market where you wouldn’t go hungry as there is so many food stalls of all kinds from around the world. Just through the market and round the corner you are greeted with  the Golden Hinde, Sir Francis Drake’s ship that he circumnavigated the world in, at the entrance to the boat there was an explorer scout group carrying out some investitures, great place for the ceremony, you could also see that they were also taking part in the alternative Monopoly run too.

The path here was quite busy and then getting extremely busier at the Southbank, so much so it really slowed the pace down. It was a hive of activity with Yoda levitating, human statues, musicians and a guy making huge soapy bubbles, certainly an exciting stretch of footpath with so much going on. But such a contrast as you pass under Westminster Bridge the crowds just disappear and we were left with just a few people taking their Sunday afternoon stroll. At this point we have a great view of Big Ben and the Houses of Parliament over the other side of the river. 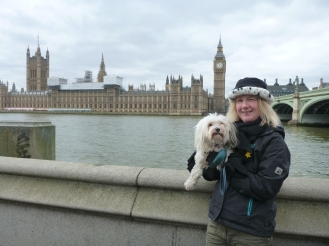 We continued along the Thames and chose to have lunch in Battersea Park, as we entered the park from the road it became a more calmed atmosphere, an unusual bird call caught my attention so on looking up there were two green parrots in the trees, they flew around from tree to tree and then off to another part of the park, it was most bizarre. Another feature of Battersea Park was the large Buddhist Peace Pagoda standing just in from the Thames, the pagoda is there to inspire peace amongst all in the world and was built in 1985. After lunch we continued  on our way west along the Thames, and the area from here was to now become much more residential with large blocks of apartments that have sprung up, a quick peek in the estate agents revealed that some of the apartments cost millions, there were also many varied house boats on the river too. The path continued through the residential areas, past Prospect House where George IV frequented and into Wandsworth Park, where we saw some chalking on the ground saying ‘Almost There’ so apt for the days walk as it was true. Before long we arrived at Putney just as a second hand market was clearing up and todays walk was to finish at Putney Bridge. A short walk up the high st took us to the station where we would catch the train back. 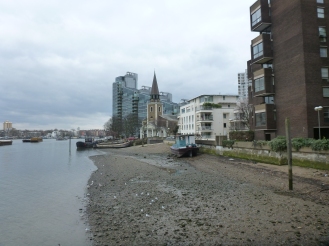 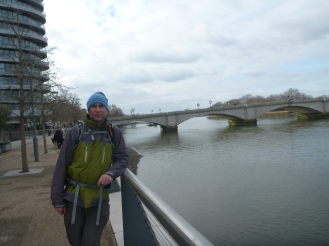