This is hike number 15 and is going to be the last stretch of the Bournemouth Pier to Brighton Pier trek. The day starts by being dropped off by Susan at Worthing Sailing Club, she is picking up Verity and going shopping for the day in Brighton, so we’ll meet up with them at the pier later. I am with two dogs today that are really eager to get walking, Kiah is accompanying Cookie. I walked up to the promenade and was really pleased to see that the tide was right out, so i let the dogs off their leads, Kiah darted straight off and down the beach and Cookie just ambled behind me.

We walked along the sands for the first six kilometres until the sand had run out and became pebbles and breakwaters. Walking on the sand meant that i didn’t see much of the foreshore part of the town, but this gave a different perspective and was much much quieter. For some reason it seems that you cover more ground quicker, but still cover the same distance. As we were walking on the beach we then passed under the Pier, looking at the seaweed clad struts that hold it up rather than walking past the more graceful promenade entrance. It was at Lancing that we eventually had to venture back up to the coastal path; which we followed for a short way to wide water lagoon where we stopped for lunch. 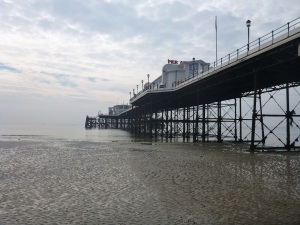 As usual there were to be many contrasts during the day as we started off by walking on the sands at a seaside resort and the next several kilometers were to be completely different and very industrious. So after lunch we walked along the last bit of promenade before reaching the residential area of Shoreham Beach and meeting the River Adur. We crossed on the Ferry Adur Bridge and entered the town of Shoreham, the sun was now shining and as we walked up East Street all the cafes and restaurants had tables out in the street, you could have thought you were on the continent in some french town. The busker in the street along with the cosmopolitan feel of lots of people eating and drinking outside gave it a really vibrant atmosphere here.

As we were leaving Shoreham the area around us had become very comercialised and industrious, on one side of the road was superstores and garages and on the other was the harbour mouth that has been here since roman times but now has scrap metal merchants and gravel yards, not the nicest part of the walk. After a short while we reached the lighthouse; which is known as Kingston Buci or Shoreham lighthouse. This lighthouse dates back to 1842 and was lit initially by oil lamps. The lifeboat station stands prominantly on this part of the harbour too as the mouth of the Adur is directly in front with Shoreham Canal to the East and the River Adur to the West.

I followed the harbour on the north side for a little bit further until i reached the lock gates that were built in 1855. These gate are to enable the shoreham canal to remain full at low tide, keeping ships afloat in the harbour. The lock is the biggest that i have ever seen as it is sized such that it can hold a ship, the lock can be crossed by foot and on the other side of the canal you came up to a promenade once again; which funnily enough is also the end of the Monarchs way, a long distance footpath that starts in Worcester and marks the route that was taken by King Charles II as he escaped the Battle of Worcester, the path is 615 miles long so perhaps i’ll walk that one another day!! The promenade was short lived and i had to then drop down to the path on Basin Road South, which was behind a big wall and seemed to go on for ages and ages. I was so pleased when i reached the lagoon at Hove’s Western Lawns as i knew from here it would be a completely different scene, from the deserted Basin Road South to the bustling promenade of this popular resort. 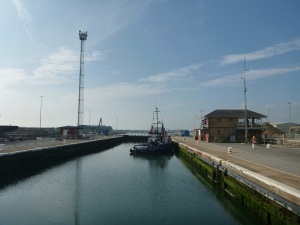 Literally in a few steps we was out of the comercial harbour and in to the exclusive resort of Hove with it’s very civilised foreshore of public lawns and lagoon; which was very busy with people learning to paddle board and wakeboard. The promenade here was now very busy and as i passed Hove Lawns people were boxing, playing with rugby balls, attending weddings as a party walked past me and just watching the world go by from their beach huts. I let Susan know that i would be finishing in about half an hour as she must be nearing her shopping by now too. We continued along the promenade and i’m sure it ws getting even busier as Hove merges into Brighton, i couldn’t believe that amongst all the people that i bumped into Sharon, we had a quick chat and then went our opposite ways. 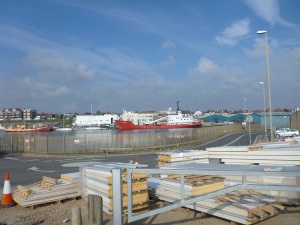 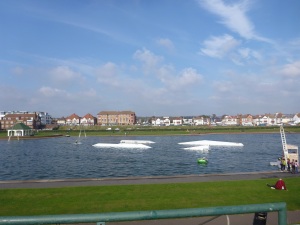 We are in Brighton now and the last part of the walk takes us past the new i360 tower that is being built and then past the arches on the lower path of Brighton Seafront. The cafes, bars and shops were teeming with people here, listening to the DJ’s and live bands that were playing. I was certainly thinking that it would be great to have a pint here, however i would save myself until i got to the pier, where i would crack open a bottle of Prosecco and have some fish and chips.

I reached the pier in about the half an hour that i estimated and had a good look amongst the crowds to see if i could see Susan and Verity, but i had beaten them there, so i waited patiently for them. About 45 minutes later they turned up with bags of shopping and promptly said that we need to go and pick up more that they had left in some shops, so the perfect end to the walk of celebrating the 176 miles travelled on foot from Bournemouth Pier to here with a glasss of prosecco and fish and chips ended up in carrying shopping bags through the town to the shops to pick up more. Laden with a rucksack, two dogs and loads of Verity’s shopping bags i somehow was not going back to the beach now and so we just caught the over crowded train back (football had been on). In my mind i had decided that if i couldnt have fish and chips here then i wouldnt be having them anywhere else tonight.

So after 283 km (176 miles) i have reached Brighton Pier. The changing coastal scenery between Bournemouth to here has been absolutely amazing, but ultimately started and finished at very popular seaside resorts. I had been on numurous buses and trains, getting to and from the start/finish points and also on five ferries of varying size that would get us across the many river estuaries. What a fantastic coastline walk in the sunniest part of the country. What am i going to do now?