Today I am to be joined by Verity who wants to see how long it would take for her to walk to Conor’s house from ours, not sure the full reason why she wants to see how long it takes but it is great to have some company of the two legged kind nonetheless. The day started by walking out of our front door rather than having to travel anywhere, it almost felt that i had forgotten something. Shortly after leaving and while we were still on our estate i heard this loud calling of “Ding, Ding” from behind, i couldn’t believe it but my brother Paul and his wife Bev came whizzing up behind us on their bikes, how random is that! They had decided to seek some sun so had ventured south from Scotland. Verity asked if they had cycled all the way and this was going to be the start of her sayings for the day.

We got to the seafront at the end of Fourth Avenue on the Summerley Estate, which is where I left off last time. The tide was high, the sky was as blue as it could be and there was a slight breeze, what a perfect day for trekking. 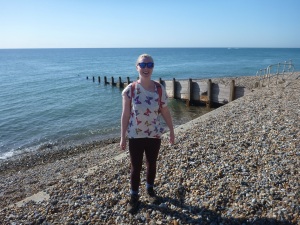 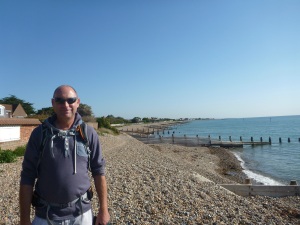 We headed East and it wasn’t long before the promenade finished and was replaced by the grassy greenswards at Middleton on Sea and then by the pebbles at Elmer. Elmer was always subject to flooding and some time ago they made some rock islands which would break up the waves before they could pound on the shoreline, they have certainly worked as Elmer has not flooded since. The islands have changed the coast along here as you now have massive expanses of sand behind them that can be seen when the tide is out, these are formed by the new currents that swirl around this part of the coast now. 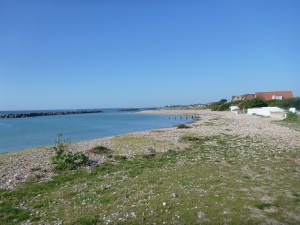 Just past the Elmer beaches the path got a bit more firm under foot for a short while until we neared climping car park, this is an area where many day visitors can park up, have BBQs and play games on the grassy car park, the beach here is quite stoney with only a little bit of sand at very low tide. The car park also has a cafe and some toilets, but no other facilities. The sun was shining very brightly by now and it was also nearing midday, Verity had her cool shades (sunglasses) on and proceeded to tell me that whenever she wears her sun glasses she says that she can’t hear properly……really!! 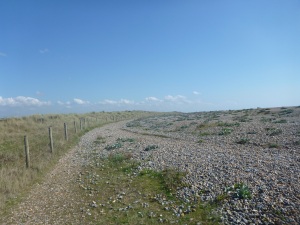 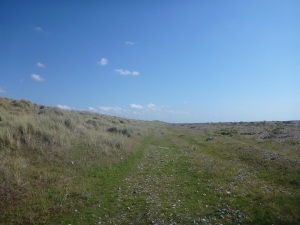 From here until Littlehampton we are to walk past the last remaining undeveloped piece of coastline between Bognor Regis and Brighton called the ‘Climping Gap’ which is a beautifully secluded Site of Special Scientific Interest, with incredible sand dunes (one of only three in West Sussex) that are home to rare and protected wildlife. It also forms part of Littlehamptons West Beach where we joined a short board walk through the dunes, past Littlehampton Fort and to the western edge of the River Arun estuary. 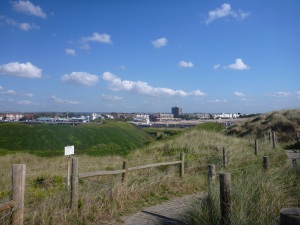 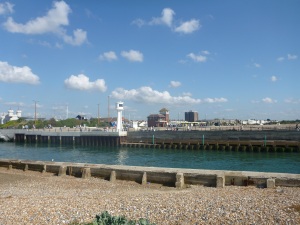 From West Beach there are two ways that you can get to the town of Littlehampton and that is either by ferry that only runs through the summer months or head further inland and cross the retracting footbridge, unfortunately for us the ferry had only just finished for the season, so we had to walk further inland to cross on the bridge. Once on the other side of the River Arun we headed back to the seafront along the newly refurbished waterfront walkway, passing the Blue Peter 1 lifeboat, Look and Sea Centre, the many day trippers sitting opposite the chip shops eating their fish and chips and the youngsters were crabbing over the harbour wall, with buckets full of the crustaceans. 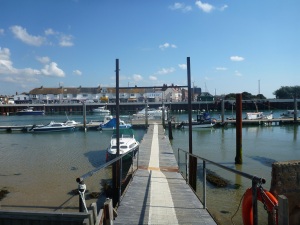 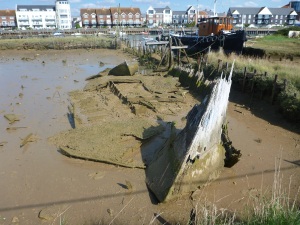 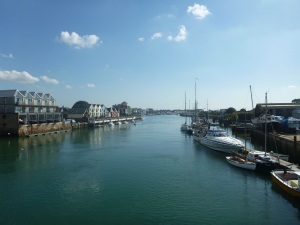 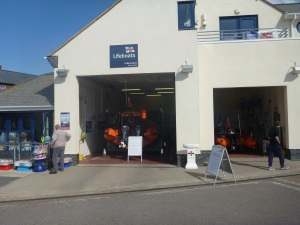 Back at the seafront the we joined the promenade that passes by the amusement park with its small roller coasters and log flumes. On this promenade it also has the longest bench in Britain which winds itself along the wall and under shelters where it goes a bit wild, not sure you could really call it a bench here but it is certainly one long length and doesn’t break. At East Beach you’ll find a cafe that has won many awards for it’s archetectral design, it’s supposed to represent a piece of driftwood, which it looks like but i have heard many different local representations. We stopped here for a well promised ice cream, so i had a 99 flake and Verity had a caramel milkshake (with ice cream in).

Heading Eastwards from here we followed the promenade past the rest of Littlehampton and Rustington where it finished and went back to pebbly beaches again, from the busy beaches of Littlehampton, we are now seeing less and less people. We decided that from here we would go down and walk on the sand as walking on pebbles seems to feel like you are walking twice as far. Walking on the sands and small rocks took us past some exclusive residences of Angmering, East Preston and Kingston. 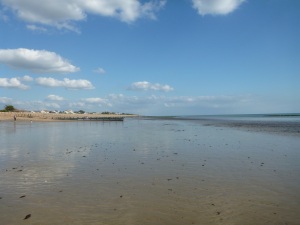 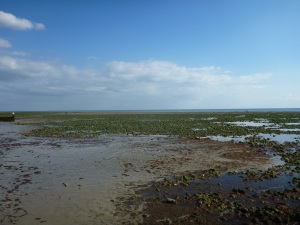 At Goring Gap we headed back up to the foreshore and walked along the grassy path that divides the greensward and the beach, before long we were at the Sea Lane Cafe; which meant that we would soon be nearing the end of our trek for the day. We continued past the beach huts and fish merchants until we got to Worthing Sailing Club; which was to be the official finish for the day. But we needed to head for the station so we decided not to go on to Conor’s but to knock at Matthew and Gemma’s to see if anyone was in, but unfortunately nobody answered, to the station it is then………. 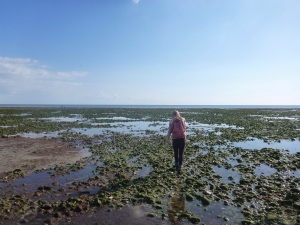 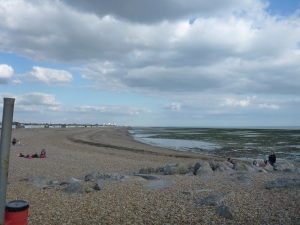 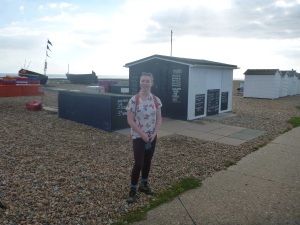 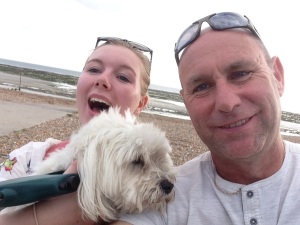