Today should have been a very straightforward day and about 20km. I knew it would be a long trek, not unachievable but essential nonetheless as Selsey was a another miles stone that I needed to reach. However it turned out to be an exceptionally frustrating day; which was down to issues with the route and lack of homework beforehand. I will explain later how we ended up doing a very tiring 30 km……

Today I have cookie and Kiah walking with me, an added challenge with two dogs, so after catching the train to Bosham and a bus down to the quay we were ready to start.

When we finished up at Bosham last time the tide was going out and we were able to walk along the tidal road a little way, however on my return today the tide was high and still coming in so the road was flooded, fortunately there is a sea wall with a raised footpath that you can walk around the Bosham Harbour area. I must admit that this part of the country is one of my favourites, I don’t know what it is about the combination of the sea, boats, harbours and the seabirds that make it so beautiful. 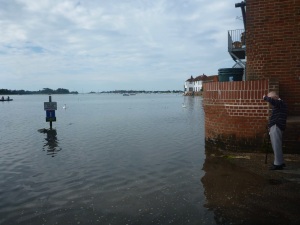 Following the coast around Bosham harbour means that you get to see the village from various angles and all the views are terrific. After following the wall, you rejoin the road which at spring tides would be totally covered, however I was lucky as only some of the road was covered although slowly creeping up the Tarmac, which meant just around the corner I had to wade through some water that covered half my boot over, lucky they are waterproof. 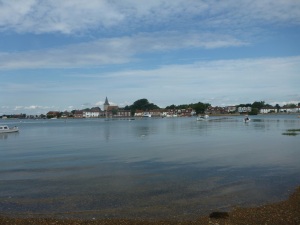 As it was high tide this meant that I was not able to walk around the footpath on the shoreline to the ferry, but instead had to walk along the alternative route along the road; which had a queue of cars on as people had not realised that the tide was high and the road impassable. The road beyond the queue was very quiet and was only about a kilometre long before a short walk through some woods to the Itchenor ferry.

Just as I got to the ferry I could see it leaving, doh! But this was OK as it gave me some time to sit down and watch the world go by, I had to wait about 15 minutes and it arrived back, it is a small boat that seats about 12, the ferry pulled straight up onto the shoreline and lowered a ramp for you too climb on, after treading on a little bit of seaweed, having wet boots and two dogs in tow meant that this was not going to be so easy as the ramp suddenly became incredibly slippery, so after a bit of a cafuffle I got one of the dogs on and then the skipper helped me aboard as if I was 90 years old. Joining me on the ferry for this trip was three bikes, six people and three nervous dogs, particularly Kiah. It didn’t take long for the ferry to cross the Chichester Channel and the docking at Itchenor was to be on a floating pontoon, so alighting was so much easier. The floating movement of the pontoon really did unnerve the dogs which made them walk really slowly and keep very low as if it was not safe. 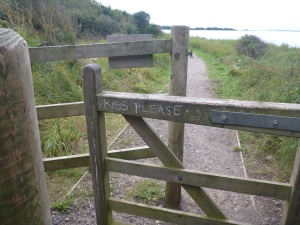 Itchenor is a beautiful sailing village with many exclusive large houses, a pub, a harbourmasters office and a boat yard, there were no shops there, which meant that I would have to wait a little longer for an ice cream.

From Itchenor you continue around the shoreline on a path which now forms part of the Lipchis Way, another long distance path from Liphook to the Witterings. On this path you pass many beautiful residences that command fantastic views across the harbour, one can only dream of living in such a place. The Lipchis Way took me right down to the beach at East Head and just as I was approaching here I got the smell of many BBQs that were being cooked on, definitely time to put the dogs back on their leashes otherwise they would be running off with the sausages. This is a very popular area for seaside day trippers from inland and London. The beaches here are made up of sand dunes with very soft sand. I’m not sure how much the parking is here but most people were here for the day. Dogs were only allowed on certain parts of the beach here, which is good so that there is an area for everyone. There were a few food outlets here containing a burger stand, fish and chip stand and a few cafes, it was time to get my ice cream here, a Mr Whippy with a 99 flake was the order of the day, it cost £2 but I got to admit it was a big one. Literally just after buying the ice cream and taking my first few licks it started to rain, first by just spitting and then with a much heavier downpour, this meant that i had to quickly woof down the ice cream so that it was’nt washed away. Timing not so clever I think. 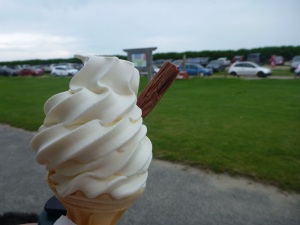 The rain was quite heavy now and my walk from East Head car park was to be along the beach at West Wittering with views out to the open ocean, such views i have not seen since setting out on my trek at Bournemouth. We continued on the promenade at East Wittering, past Peter and Jo’s former house (hasn’t changed much in 18 years) and through the estates to Bracklesham Bay, the only way was around as all the foreshore houses from here seemed to have private beaches.

The next stage of the trek is where my problems were going to occur and if I had known what was to lie ahead I would have stopped the day at Bracklesham Bay and had a coffee in Billy’s cafe right on the seafront (I would certainly recommend that is what you should do). So from the car park we walked along East Bracklesham Drive to the end and then down on to the sands, the dogs didn’t like walking on the pebbles as it tended to hurt their paws, so I let them off on the sand and we walked right on the edge of the sea. We could see that West Sands caravan park was not too far in the distance and that we would not be too long in reaching there, the beach as we got nearer was becoming not so nice as there were some large iron poles probably old war sea defences sticking out and the sand was becoming very clay’y. I was thinking that I didn’t remember these the last time I walked along here, anyhow onward I plodded and could see the holiday centre only a couple of hundred yards away when all of a sudden I came across an outlet which was about 20 metres across with very fast flowing water from the land, I could not believe it, I had a quick scout around and there was no way that I was going to get across here, it was all to do with flood relief works and realignment of the Medmerry head allowing the sea to reclaim some of the land thus protecting the caravan parks and houses in the area. So after admitting defeat and the fact that I was not going any further I turned around and started to retrace my footsteps back. My face was a picture of mega grumpiness……..lol.

I had walked back approximately 1.5 km when I saw some people on the top of the stone bank so thought I would head up there too, only to see a series of signs saying no access to West Sand along the beach and that I would have to follow the detour around the environment agency works, why was there not a sign lower, if only I had walked up higher I would have seen these signs.

The walk around this new flood plain added another 9km on the day, Cookie was not happy, my face was grumpy and Kiah still seemed to have the energy to run around like mad. We finally reached West Sands and all the holiday makers were in the clubhouse bar supping their pints overlooking the wet landscape. 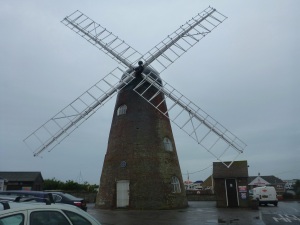 This is where I was going to finish so I headed for the bus stop only to see the bus pulling away, so I walked into the town centre and caught a bus from there.

The final part of the day was also not without incidence, however, when I look back now i suppose it was quite funny. When I got onto the train, it was very crowded so I had to hold the dogs in close such that they would not get trampled. The next thing I see is that Kiah has slipped her collar and making an exit from the train, I managed to grab her just before she jumped, fortunately a girl helped by holding cookie so that I could get Kiah back on the lead. The wet dogs thanked them by shaking themselves splashing their legs with the cold dirty water.

After the 30km that i had done today i still managed to get to Arundel Festival to see some bands, goodness knows how, but i did!