Technically today we (Cookie & I) will be progressing along the coast by a few kilometres, yet clocking up nearly 18km on the boots as we will be venturing around Thorney Island. On leaving St Peters Square in the centre of Emsworth we followed the High St out of town to Slipper Mill Pond, where we walked on a causeway to the Emsworth Yacht Club and marina, an opportunity could have been had here to stop for a coffee at the Deck Cafe as it commanded great views over the marina, but decided to carry on as i had only just started. The marina also had some deck houses which were built in the 60’s and raised up on stilts, i’m sure that they were all used as holiday homes but looked really unique. 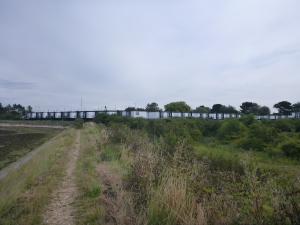 It was a long straight walk down the western side of Thorney Island before you get to the security fence, i had fingers crossed and was hoping that we would be allowed to pass through as this leg was so crucial in my completion of the pier to pier trek. Thorney Island is a military base and has been since 1938 where an RAF airfield was built, today it is occupied by the Army. On approaching the security fence and gate you are watched by many cameras. I pushed the gate and it was locked, there was however an intercom/help button to press, so i pushed it and waited. I stood there thinking that i can’t look like a threat with my hike boots, map and fluffy dog, after a few seconds there was a big click and the lock was electronically released on the gate, i pushed and it opened, yippee i can continue the walk, however it was paramount that i stuck to the path, i didnt fancy being chased by the frequent large guard dog patrols. 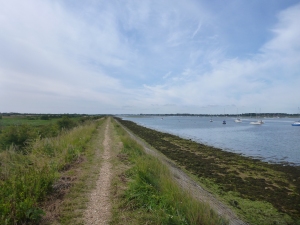 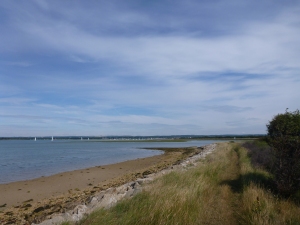 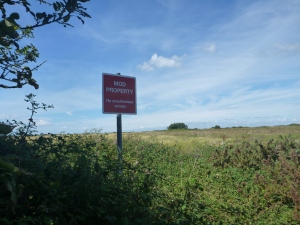 The walk was very remote along the western shores of the island and i saw no one until i reached the southern side, where people were fishing and flying model aircraft. The path had been raised up almost like a small dyke keeping the sea at bay, the path dropped down when we reached Pilsey Sands which is a nature reserve on the southern most tip, the public are not allowed onto Pilsey sands, but there is a lovely tranquil beach here that you can access, there was only five other people on the beach and across the water was East Head at the Witterings which would have been far far busier. 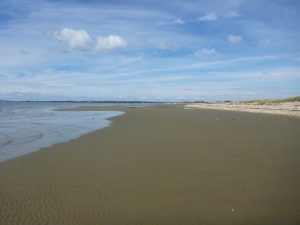 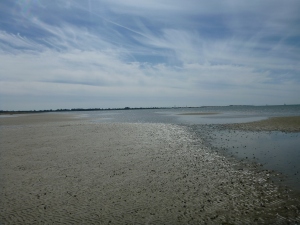 From the sandy beach here we head northwards on a windy path through the reed beds and across some plains on which what looked like Samphire was growing, the path from here and up to West Thorney was shielded by some very tall hedges so the views were a little limited up to the village. West Thorney is on the East of the Island (didn’t seem to get that!) consisted of some houses a sailing club and a church called St Nicholas, all of a sudden the tranquility of the rest of Thorney certainly stopped here as it was a hub of activity with children playing in the grounds of the sailing club and many people pulling their boats in and out. The church’s graveyard had many many headstones depicting that those buried here had served in the forces. The path at the church drops very low and is not passable when the tide is high. 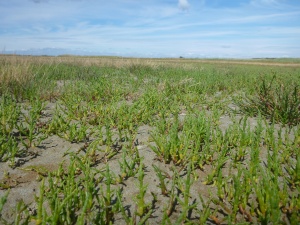 From West Thorney we  headed north along the path that was once again raised up above the water on one side and the land on the other and was quite straight all the way up to a very small inlet called Thornham Marina, apparently Chichester Harbour’s best kept secret place to moor your boat, it was quaint with some of the pontoons looking very homemade. Just along from here i arrived at Prinsted. A lovely coastal village with some very prestige houses in. I stopped here and had an ice cream that was being sold by the sea scouts as their HQ was right on the waterfront, what a fantastic fundraiser for them as they were also selling teas and coffees too, a very successful venture if i may say as there was lots of people sitting here enjoying the sunshine. 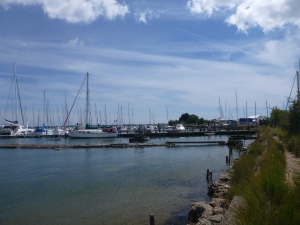 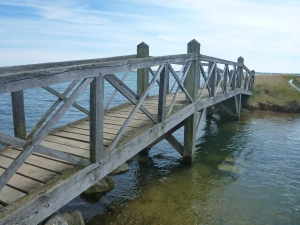 From Prinsted it was a short walk along the harbour to Nutbourne, quite a few people were also enjoying this stretch by taking their post Sunday lunch stroll along here, i must say it was certainly beautiful. My day’s trek was to finish up at a bench on the shoreline that was placed there in memory of an actor, but unfortunately i cannot remember who it was, so annoying. A short path inland from here takes you to the village of Nutbourne.