Today is a short leg to achieve another milestone on this journey and finish the solent way, its a good job that it’s short as the weather is not so kind today with a bit of drizzle in the air.

Brockhampton is now an industrial suburb of havant that has a few surprises, there was once a mill here that was recorded in the Doomsday book. The brook that runs through here is so beautiful that you would think that you are in the countryside, yet you turn the corner to more industrial works. The coastal path from here now follows Langstone harbour around to the bridge that links Hayling Island to the mainland. 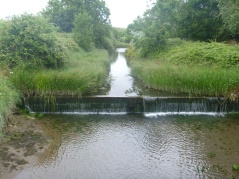 The Solent Way crosses the main road here with lots of holiday makers heading on to Hayling Island. On the other side of the road we walked down Langstone High Street, this was like taking a step back in time with the many 18th century cottages and a pub called the Royal Oak which over looks the harbour. Part of the High Street on a very high tide is prone to flooding and evidence of this can be seen by the boards fixed on the street door to stop any water getting in. We then continued on the harbour wall and walked past the old corn windmill that was built in 1730, the mill is a key local landmark that you will see in many photos and pictures. 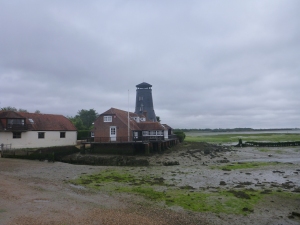 On leaving Langstone village the harbour side finishes and the path drops down on to a tidal footpath through to Warblington, so lucky we timed that right with the tide out. The sea defence here is made of old railway sleepers and is doing a good job in keep in the land back and the tide out. 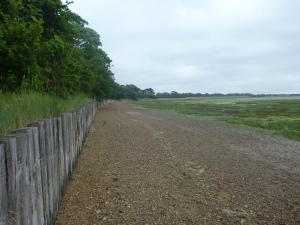 At Warblington the path left the wet slippy shore and headed inland a little passing through the cemetary of St Thomas a’ Becket Church; which has been here since the late 12th century. At Warblington the remains of the the gate house can be seen of Warblington Castle which was once a splendid, fortified house and the setting for some of Englands most important families and the political games that they had a part in. 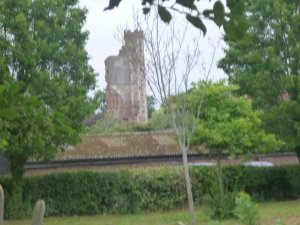 The Solent Way leaves the coast a little here and heads passed a field before returning to the shoreline at Emsworth. The final leg of the Solent way is along a promenade past Mill Pond; a wall that was constructed in the 18th century with gates to keep the tidal water in at low tide, allowing the merchant vessels to unload. The promenade then meets the quay side at the end of South Street and a short walk up this road takes you to St Peter’s Square where the Solent Way finally ends. 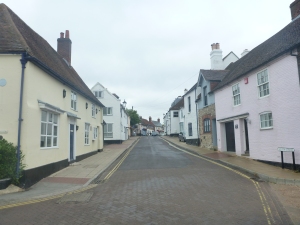 St Peter’s Square in Emsworth houses an amazing bus stop that is paying tribute to families in the war and can be seen by the photos that are printed on the glass. 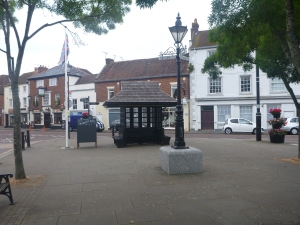 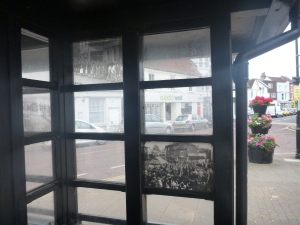