Certainly a day full of contrasts: From unstable cliffs in the west to salt marshes in the east and from   t-shirts in the morning to coats in the afternoon………

The day started by parking up at Brockenhurst and catching the train to New Milton, the idea was to then catch a taxi to the beach, but the long wait meant it was quicker to walk, albeit that it added a couple of km to the day.

As soon as we arrived at Barton on Sea we headed East from the point where we finished last time. Instead of walking on the beach and stones and potentially becoming trapped by the tide and cliffs, we decided take heed of the lesson learnt yesterday and to follow the footpath on the cliff top. This was an amazing path that had some massive cracks near the cliff edge and you could see some recent slippages, in fact I read that the cliffs here are eroding by up to 1m a year. This cliff path led us passed a golf course, cow fields and on to Milford on Sea, which has also seen some major cliff erosion, a lot of the beach huts were destroyed in the past couple of years by some big storms. 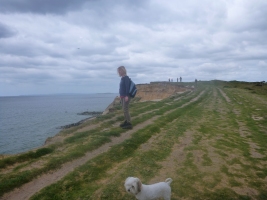 We decided to stop for lunch at the busy ‘Needles Eye Cafe’ which is in a great location and commands some terrific views of the Isle of Wight and the needles, it’s a shame we had to sit at the back with the dog so we couldn’t admire the views, we could have sat outside but it was just a little bit too windy. We ordered a tuna baguette and pannini with a little side salad which refuelled our energy ready for the afternoon.

The cliffs petered out at Milford on Sea and gave way to a huge shingle bank that is a mile and a half long called ‘Hurst Spit’, at the end is a lighthouse and a castle that was built by Henry VIII to protect the harbours of Southampton and Portsmouth.  It took us an hour to walk to the end and around the castle which involved some climbing over and stooping under breakwaters. At the end of the spit we were less than a couple of km from the Isle of Wight. Cookie hated this part of the days walk as it was over the pebbles which must have hurt her paws and made her limp (such a wimp), trouble is we both felt sorry for her and ended up carrying her, you should have seen the looks we got from passers by………..lol. It would have been good to go in the castle, but lack of time meant we needed to press on, so we joined the queue for the Keyhaven Ferry. Ninety three of us boarded the ‘Solent Rose’ which was to take us back to the mainland, the ferry wound it’s way through the salt marshes and the many yachts that were moored up.

The ferry trip was quite smooth considering that the wind had been strong all day and was at its stongest on the shingle spit. 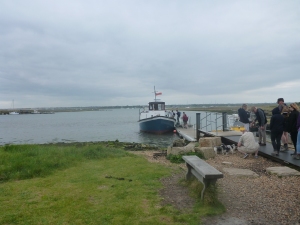 After coming alongside we left the ferry and rejoined the ‘Solent Way’ that meandered around the many lagoons of the salt marshes that makes up the Keyhaven/Lymington nature reserve. Each lagoon was very different and all were named, Susan’s favourite was Pennington lagoon as it had an island in the shape of an alligator, however mine was Eight Acre Pond due to the fact that it had islands that you could explore. This is an ideal place if you’re into bird watching; which I seemed to have shown an interest in since the bifold doors were fitted at home. On this part of the walk we managed to see a Ringed Plover, a graceful Heron take off and land, many shelducks, swans, geese and of course seagulls, although the seagulls here tend to be be smaller with black heads, unlike the massive ones that have nested on our roof at home. 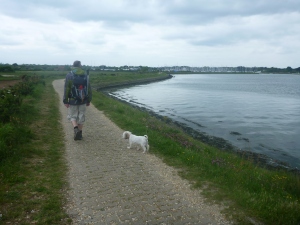 After plenty of winding in and out around the salt marshes we arrived in Lymington and the place was alive with yachts, ferries and dinghies coming in and out of the estuary. By this time we were all peckish and as it so happens there was a pub right by the marina called ‘The Mayflower’ so after a quick look at the menu thought this is the place to eat. We shared a scallop starter, then Susan had the Ringwood beer battered fish and chips and I ordered the Lymington crab salad, I had been craving crab since I started this trek and this certainly was worth looking forward too. This was all washed down with a pint of  ‘Fuggle Dee Dum’ from the Isle of Wight Brewery. 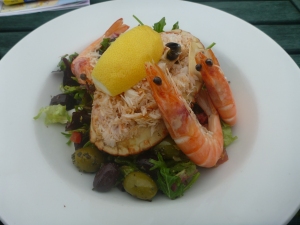 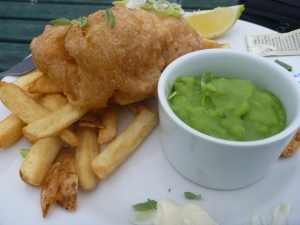 Following dinner we made our way back to the station, through the cobbled streets of Lymington and as we passed by the quayside we saw the most cutest cygnets that were so young.

The day in brief:

A day of contrasts

We started the Solent Way