The travelling to Bournemouth Pier went really well, we pulled off the M27 just before the holiday traffic queue, only had to wait 10 minutes for the train and then jumped straight on a bus to the pier, some new experiences for Cookie. I don’t think she thought much of the train however she did cock her head every time the approaching station announcement was made. 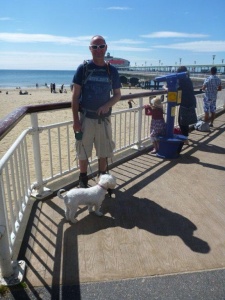 So Susan and myself are at Bournemouth Pier, the weather is fantastic, really sunny and quite hot, there are loads of people wandering down to the beach in their summer gear. Some quick photos by the pier and then we set out Eastwards along the prom, Hengistbury Head could be seen in the distance, looks a long way off but in reality is just over half way. The beach is buzzing with all sorts of people, a choir being filmed, beach volleyball being played, loads of bikinis and some speedos, I felt a little over dressed in my hike boots and shorts.

The walk between Bournemouth Pier and Boscombe Pier had such a lot physically going on with the active trail, so if you want to boulder, surf, volleyball or just exercise as well as walk then this is the place. We also saw some beach huts decorated in Cath Kidston style.

After walking along the prom of Boscombe and towards Southbourne we decided it was time to find some shade and have lunch, however there was no shade, we kept walking in the hope of finding some but to no avail, so ended up eating our sandwiches directly in the heat of the midday sun. 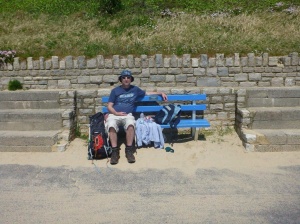 After lunch we continued our trek and eventually reached the end of the prom and the sandy beaches and headed on to Hengisbury Head. The scenery changed from here as we climbed up, Susan didn’t want to go over the top so we split and said that we would meet the other side, which was all well and good but we never actually said where we would meet which meant that we ended up waiting for 20 mins in two different places, after a quick call we were reunited. On the far end of the Hengistbury head is Mudeford Spit which has loads of very exclusive beach huts, with a few up for sale for a mere £250,000, thought about putting an offer in on one……….not!

From Mudeford Spit we caught a short ferry across to Mudeford Quay, where we saw lots of people crabbing off the side. The smell in the air was that of the sea, lovely. The beach has also now gone to pebbles from sand and again there is a promenade on which you can walk. It was time to stop off for an ice cream and I can certainly recommend the ‘Beach Hut Cafe’ for a New Forest Whippy ice cream, it was so creamy and delicious. The promenade came to an end which meant we had to walk on the stones and sand making it harder to walk, the cliffs were getting higher here and were covered in trees. 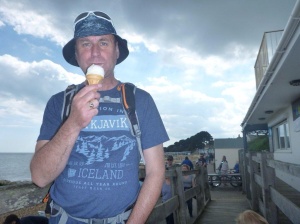 The next part of the journey could have been a massive mistake of the day and we don’t recommend that you take the same route as us. From Chewton Bunny we decided to walk along the beach, saving us a couple of km in not having to walk inland around a holiday camp, the beach here was weird as it looks like it is gradually being engulfed in lava, but really it was the mud slides down from the cliff. The beach was getting quieter and eventually we were all alone on the there, it was so peaceful with just the sound of the waves lapping over the pebbles, oh and Susan keep saying are we nearly there yet. Tiredness was now beginning to set in my shoulders ached a bit from the rucksack and Susan was tiring too, so we kept trudging along the stones and soon realised why no one else was on the beach as we came across a sign saying ‘no access to Barton on Sea’………Susan’s heart sank, there was a look of trepidation on her face, she couldn’t face retracing her steps, what were we going it do…………..so I set forth beyond the sign to see if there was a way through. I saw some boys playing on the rocks just below me, so they must have got through somehow. I returned to Susan with good news that we would be able to get through, but it did mean a bit of scrambling up a very dodgy cliff that had evidence of lots of land slips. 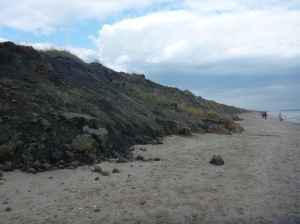 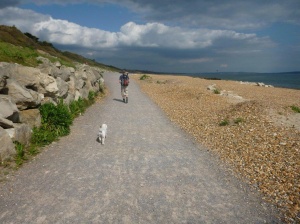 The top of the cliff was Barton on Sea, we had reached our destination for the day, now to catch the bus back to the car…………well that was the plan, but we had just missed it by 15 mins so had to walk another 2.5 km to the car.

The day finished with a meal in the Turfcutters Arms in East Boldre, fantastic pub grub, the lamb shank and homily pie was delicious……….

From sandy beaches to muddy cliffs and pebbles, from the bustling beach of a holiday town to the tranquility of Barton on Sea.

What a great day!